Situated in Pooley Bridge at the top of Ullswater, The Crown Inn Pooley Bridge has a restaurant, bar, garden, and free WiFi throughout the property. The property features a terrace and a 24-hour front desk.

Rooms come complete with a private bathroom fitted with a shower and a hairdryer, while some rooms at the hotel also boast a seating area. The rooms in The Crown Inn Pooley Bridge are equipped with a flat-screen TV and free toiletries.

The accommodation offers a continental or buffet breakfast.

Guests at The Crown Inn Pooley Bridge will be able to enjoy activities in and around Pooley Bridge, like hiking. The Ullswater Steamer is a short walk from the hotel and takes travellers all the way down Ullswater to Glenridding and back.

Windermere is 21.1 miles from the hotel, while Keswick is 19.9 miles from the property. The nearest airport is Durham Tees Valley Airport, 67.7 miles from The Crown Inn Pooley Bridge.

The Village of Pooley Bridge

Pooley Bridge straddles the River Eamont at the head of Ullswater in the picturesque Eden Valley. The town’s two wide main streets are lined with greystone houses and a number of teashops, all overlooking the lake.

A popular way to explore the area is to take a boat from Pooley Bridge, leave the boat at Howtown, and then walk to Glenridding and catch the boat back to Pooley Bridge. This was one of Wordsworth’s favourite walks and offers views of the lake and Helvellyn.

Local attractions include Ullswater (of course), Lowther Castle & Gardens, and Moor Divock. Moor Divock is 300 metres above sea level, forming part of Askham Fell, to the East of Ullswater. Dotted around the moor are many cairns and burial mounds, the most conspicuous being White Raise, near the junction of the trackway over the moor, and the path to Askham.

The Cockpit is by far the largest and most impressive of the Moor Divock circles, is about 1km to the west of the two smaller circles. It is likely that the stone circles and burial mounds belong to the bronze age. The cockpit consists of a low penannular bank of stones, 3 metres wide, and with an internal diameter of about 26m. Set into the bank are many large stones, the tallest of which form the inner face of the circle, some reaching up to 1 metre high.

The name Pooley Bridge derives from a large pool in the River Eamont,”The Hill by the Pool”. The ‘Bridge’ part of the name was added in 1800.

The church of St. Paul’s can be found in the centre of the village and dates from around 1868. Opposite the church is a row of very old houses, one of which was a blacksmith’s.

A 16th century bridge was built across the River Eamont, which flows from Ullswater to Eamont Bridge, and on to the River Eden, near Langwathby.

Surrounded by nature. Some with lake views. Like a breath of fresh air.

For a long and happy sigh of satisfaction. A haven for the weary walker. A playground for the sprightly traveller.

Generous beds for a well-earned rest. Cosy throws to keep your toes toasty and plump armchairs. Bring a novel.

Some of our rooms are dog-friendly, but we charge an extra £15 per pet.

Taking it up a notch from our Standard Rooms. A bit more space and individuality that shines through. An extra sofa here. An armchair to sink into there. A picture to make you contemplate. And luxury everywhere.

Welcome to our amazing feature room. The largest in the house and ideal for longer stays.

Also with the option of a single bed, so it’s great for families too.

Comes with a magnificent view of the lake through a quirky triangle window and a large sofa for sinking into. Bright and sunny and totally brilliant.

Everything inspired by nature. Wholesome, local and lots of it. Big plates of food for the hungry.

Platters and salads for eating in the sunshine. Soup and a crusty roll for a cold-weather meal. Beer and wines for any occasion or temperature.

We’re not currently operating a table booking system. Please come in and we will do our utmost to accommodate you. Please note we are stopping serving food at 7:00pm.

Order & Pay
We are operating a convenient order and pay system in our restaurant. Simply scan the QR code on the menu using your mobile phone camera, then order food and drinks directly from your table. One of our team members will bring your items to you when they’re ready. As always, our team will be on hand to take your order as well. 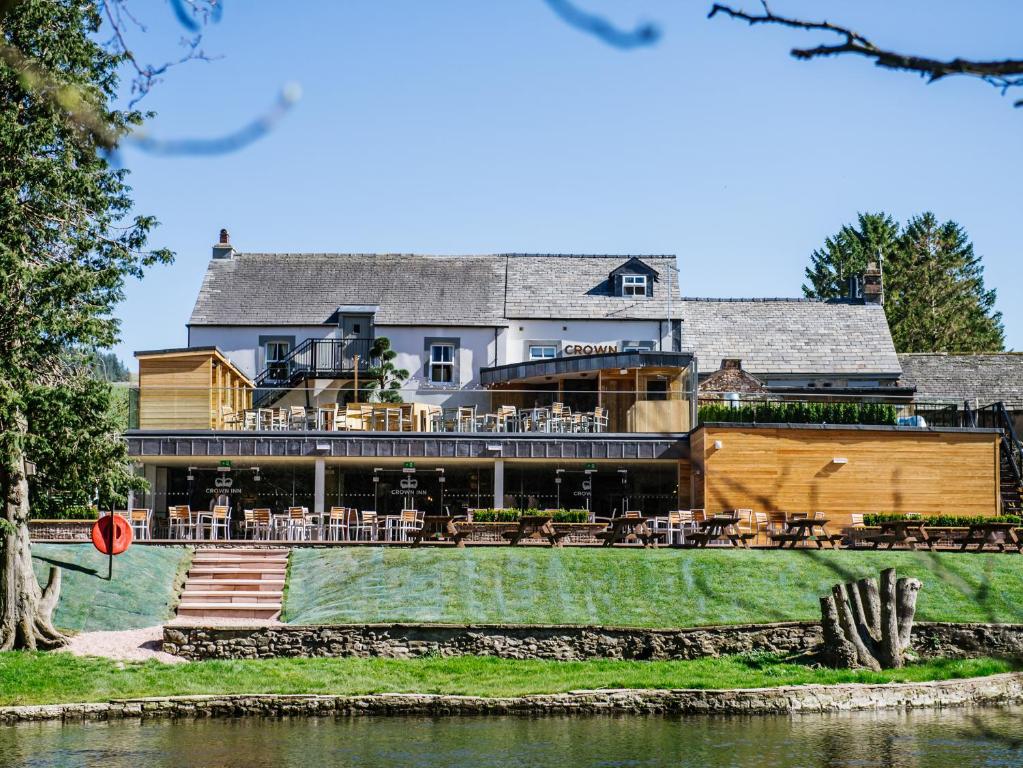 What kind of breakfast is served at The Crown Inn?

Guests staying at The Crown Inn can enjoy a highly-rated breakfast during their stay (guest review score: 8.7).

Does The Crown Inn have a restaurant on site?

What type of room can I book at The Crown Inn Pooley Bridge?

Room options at The Crown Inn Pooley Bridge include:

How much does it cost to stay at The Crown Inn Pooley Bridge?

The prices at The Crown Inn Pooley Bridge may vary depending on your stay (e.g. dates you select, hotel’s policy etc.). See the prices by entering your dates.

What are the check-in and check-out times at The Crown Inn Pooley Bridge?

Can I park a car at The Crown Inn Pooley Bridge?

The following parking options are available to guests staying at The Crown Inn Pooley Bridge (subject to availability):

What is there to do at The Crown Inn Pooley Bridge?

Which popular attractions are close to The Crown Inn Pooley Bridge?

What are some of the property amenities at The Crown Inn Pooley Bridge?

The Crown Inn provides a wonderful restaurant and bar with a superb menu. Rooms benefit from wi-fi. The popular outside terrace is an awesome spot to enjoy some afternoon sun.

What time is check-in and check-out at The Crown Inn Pooley Bridge?

Check-in is from 3pm, Check-out is before 11am.

Book A Hotel Room around Ullswater

Plan Your Next Break